While Heart Evangelista has denied that she's crazy rich a few times, there is no doubt that her bank account is pretty well-stocked, more than many of us. How you ask? Here are 5 major reasons why:

1. Heart Evangelista comes from the Del Gallego clan. You know, that town in Camarines Sur, Bicol.

Many people would often attribute her early wealth from being part of the Ongpauco clan from her father's side, but barely anyone mentions that her great-grandfather is Don Juan Del Gallego, the Spanish traveler and tradesman who eventually founded the town of Del Gallego, and built the first lumber mill in Sitio Pinagdapian. The business was so successful that eventually the townspeople left their fishing livelihood to take part in the booming industry. Don Juan built a school and a chapel, and married one of the natives, Potenciana Ubante. One of their 16 children was Conchita del Gallego who married Jose Payawal, parents of Maria Cecilia Del Gallego Payawal, mother of Love Marie Payawal Ongpauco aka Heart Evangelista.

Going back to the lumber mill, it became so successful it expanded to the town of Danawin and generated countless jobs that caused a lot of migration to the town of people in search of a job and a better life. 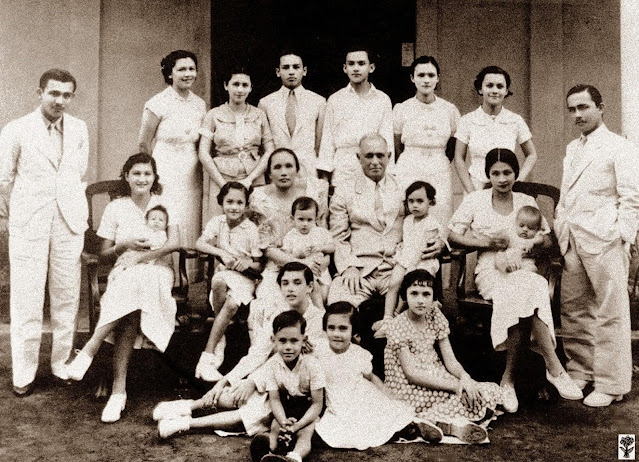 Don Juan with his wife Potenciana and their 16 children and grandchildren, circa 1935

With the help of the then-President Manuel Quezon, Danawin was renamed Del Gallego, after Heart's great grandfather, for founding and developing the barrio into a bustling municipality. Dubbed the Grand Old Man of Bicol, Don Juan eventually became Del Gallego's first mayor, built the Del Gallego Central School and the town hall with his own money, and was instrumental in erecting the southern line of the Manila Railroad Company.

In 1941, Don Juan's eldest son Manuel became governor of Camarines Sur in 1941 but was tragically assassinated after a few months in office. Not long after, Don Juan died of a deadly disease in his home in Manila, and left his enormous wealth to his wife and remaining children.

2. Everyone pretty much knows this one: Heart Evangelista came from the Ongpauco clan, famous for the Barrio Fiesta chain of restaurants.

We all came to know Heart Evangelista as that cute actress from the Barrio Fiesta group of restaurants. Barrio Fiesta was founded by her grandmother Sixta "Mama Chit" Evangelista Ongpauco in 1952 in their family home on Highway 54 (now EDSA). Her cooking was legendary that it spread all over the Philippines and became the venue of choice for various Filipino occasions. This allowed the eight Ongpauco children (Heart's dad Rey included) to expand its reach and build several more Barrio Fiesta restaurants in the country. In the late 80s the Ongpauco family exported Barrio Fiesta to the United States. To date, there are over 50 active Barrio Fiesta restaurants in the world, with branches spread across the Philippines, USA, Canada, Qatar, Dubai, and Abu Dhabi. The franchise is still managed by the Ongpauco children and grandchildren, with Heart's cousin Happy leading the international expansion. In one interview, Happy said:

"There’s so much potential for franchising it in the country. Right now, the second generation is not really keen on it. They don’t see the point and I guess they’re old-fashioned that way,” says Ongpauco-Tiu. “But the third generation, my cousins and I, we’re trying to put structure into the whole system to make it franchise-ready. We really want to grow the brand...We’re really pushing the family to work on it, to continue the legacy that my grandparents built. We’re doing really well in our businesses abroad, but there’s more that could be done here in the Philippines."

No wonder Heart brought the Bling Empire cast to Barrio Fiesta in California—are we about to see the famous Filipino restaurant on Netflix? Time will tell!

Barrio Fiesta eventually expanded to manufacturing meal essentials and condiments in 1987. In 2011, 80% of the company was bought by Splash Corp. aka Prime Global Corporation for Php472 million, with the 20% of the shares still controlled by the Ongpauco family. Barrio Fiesta exports its products to the United States, Canada, Australia, New Zealand, United Arab Emirates, Saudi Arabia, Qatar, South Korea, Japan, Taiwan, Hong Kong, Singapore, and Papua New Guinea. Barrio Fiesta Manufacturing is known for its sautéed shrimp paste or “bagoong”, with a 65-percent share of the sautéed shrimp paste category in the Philippines, and 95 percent of the international market in 2019 (that's freaking huge!). So even at 20% divided among the various members of the Ongpauco family, that's a shiny penny.

3. Heart Evangelista has been an actress and brand endorser for 24 years.

Yep, Heart's showbiz career is as old, if not older than many of her young fans. Heart started out as a commercial model after being approached at a mall. Although she came from a showbiz family as well (Heart's great-grandfather Bonifacio Ongpauco owned Everlasting Pictures motion picture company in the 60s), her parents weren't keen on her being an actress. Eventually they caved so at 13 she was introduced as one of the Star Magic Batch 9 talents.

Her chemistry with her G-mik co-star and loveteam John Pratts thrust her into stardom, bringing about countless brand endorsements left and right. Not long after, Heart Evangelista became the teen queen of her generation, both in television and movies. She was brought up, however, in a very sheltered home life. Her income and finances were strictly managed by her parents, investing them in various assets according to one of her interviews and Heart only received a monthly allowance for her expenses. Only until her late 20s was she able to have complete access to her bank account, to the encouragement of her then-boyfriend-now-husband Chiz Escudero. She reportedly went wild after seeing how much money she had, and Chiz had to teach her how to budget and invest.

To date, Heart is one of the most sought-after actresses and endorsers in the Philippines. She was even rumored, at one point in 2011 and 2018, to be the second highest-paid female talent of GMA Network, next to Regine Velasquez. For her current list of endorsements, check here.

4. Heart Evangelista is a celebrated artist, and in-demand too.

Apart from being an actress, endorser, and business owner, Heart Evangelista is an in-demand visual artist. She has done 6 sold-out exhibitions in Asia, has collaborated with Carolina Herrera, and is currently part of Moonlight Arts Collective founded by Brandon Boyd of Incubus. Heart's paintings are valued at P3-6 million each. 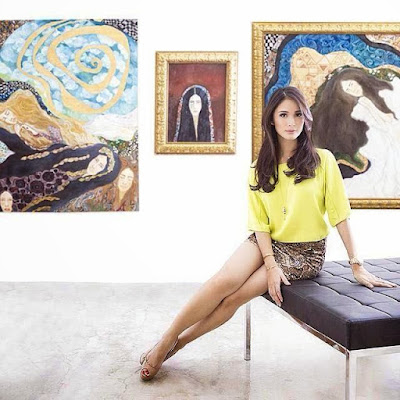 Perhaps one of the things that make her stand out as an artist is her #lovemariehandpaintedbags. In one of her recent interviews, you can have Heart paint on your luxury bag starting at P200,000. Her hand-painted luxury bags are currently on exhibition at the Snow Lodge in Aspen, CO.

To see more of Heart Evangelista's art, visit this link.

5. Heart Evangelista is one of the top 10 luxury influencers in the world.

With her exquisite taste in fashion and irresistible charm, Heart Evangelista has positioned herself as a powerful influencer. If you've seen #HeartMadeMeDoIt or #HeartEffect on social media, that is just a testament to her influence. In fact, her endorsement is so powerful Forbes France recognized her in their Top 10 Luxury Influencers list in 2019, which included the likes of Chiara and Valentina Ferragni.

According to reports, luxury influencers with millions of followers like Heart can command from $75K to $100K (note: dollarsssss) per Instagram post. To attend fashion week like Heart does every year, influencers are paid between $10k - $100k to sit per show (note: this article was posted in 2015 so adjust according to inflation).

Heart has been working with various luxury brands like Ferragamo, Fendi, Chanel, Louis Vuitton, and many more. Recently, Heart Evangelista has been formally welcomed as part of the Dior family, so who knows how much she's getting per campaign and fashion show attendance?! Your guess is as good as mine!

Final word: Heart Evangelista may have come from a wealthy background, but a lot of her new wealth was all HER. From being an actress as early as 13, brand endorser, artist, and influencer, whatever she has today she has worked hard for! Yay to inspiring, hard-working women!

DISCLAIMER: I am in no way affiliated with Heart or Heartworld. All texts on this post are based on my own research. If you have any corrections or clarifications, send me an email!

Hi! Thank you for visiting my blog! Like what Heart says, the Internet "should be a fun place where people can inspire each other and make friends", so please be mindful of your comments. xx