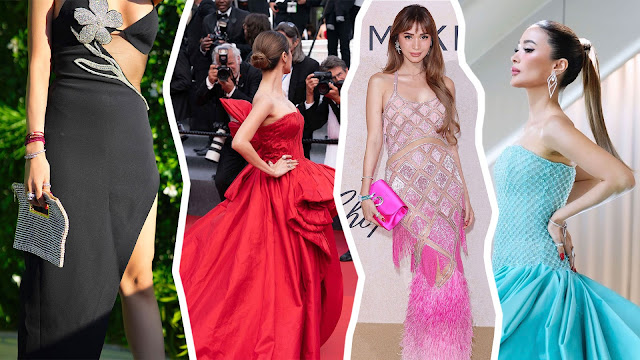 It's been a long time coming! For months we've been eagerly anticipating Heart Evangelista's debut at the Cannes Film Festival. It was supposed to happen last year, but she had to prioritize her showbiz commitments in the Philippines. So imagine our delight when a rumor started circulating around Heartworld that she's bound for France. And then it happened!

Heart Evangelista announced her arrival in Cannes with a bombshell dress from David Koma and purse from Rosantica.

Day 2: A Day with Chopard

The next day, she stopped by Chopard, the official partner of the Cannes Film Festival, wearing this stunning Correta top by Filipino designer Cheetah Rivera.

On her third day in Cannes, Heart Evangelista attended the screening of Broker and stunned everyone with a flaming red sculptural dress by Tony Ward Couture and jewelry by Matara Studio. This look was hailed as one of best dressed by several international magazines such as W Magazine, Harper's Bazaar USA, New York Observer, and Vanity Fair Spain.

After the screening, Heart attended the amfAR Gala, a foundation aimed at supporting AIDS research and HIV prevention. For the event she wore a sparkly Hamda Al Fahim fringe dress paired with a Jimmy Choo clutch.

Heart Evangelista made even more noise when she attended the Un Petit Frère screening the next day, wearing another Tony Ward Couture creation and Messika Jewelry to accessorize.

Soon after that she headed straight to the beach to do a quick editorial shoot for Tony Ward Cannes 2022 Capsule Collection, pictured above. How fun!

To cap the week, Heart Evangelista did a mini photoshoot with Edward Berthelot, fashion and editorial photographer for Getty, wearing this stunning couture dress from Nicolas Jebran.

Why Was Heart Evangelista at Cannes?

So many people have asked, why is Heart Evangelista at Cannes? Did she have a film to promote there? FYI, you don't need to be part of a film to be invited to Cannes. As long as you fit into the committee's categories the committee can grant you an invite, pending review of course. For the past few years, the Cannes committee have been incredibly inclusive as well, inviting designers, models, socialites, and influencers to grace the Palais des Festivals carpet to help generate press for the event. As it happens, Heart Evangelista is an established actress so it shouldn't be a no-brainer she's there, not to mention France is quite aware of the might of her influence, after Forbes France ranked her as one of the top 10 luxury influencers in the WORLD and Launchmetrics ranked Heart as #4 in this year's most impactful influencer at Paris Fashion Week. She also mentioned in her interview with GMA News that the designers who dressed her invited her to attend, in short she was there to WORK and she didn't pay to be there like so many of her critics claim. You can't buy your way in an exclusive event like Cannes. So yes, Cannes is an invite-only event and subject to accreditation by the Cannes committee, and they approved of Heart to attend.

So proud of our very own Heart Evangelista and her glam team for elegantly representing the Philippines and making waves internationally! Can't wait for the next few weeks as she unveils more of her international projects. Stay tuned!